Buddhist tour of India and Nepal in one week 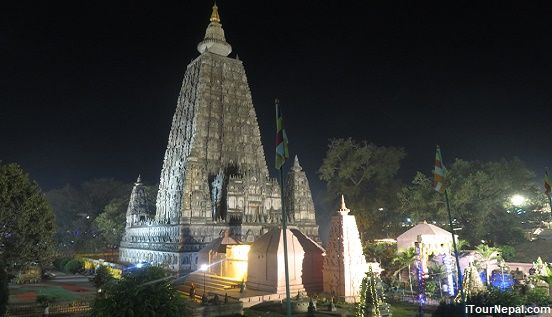 Visit the most important Buddhist pilgrimage sites of India and Nepal just in one week. You will see the UNESCO Heritage sites of Bodhgaya and Lumbini and other important sites enroute Varanasi to Kathmandu. This Buddhist tour visits four sacred sites of Lumbini, Bodhgaya, Sarnath and Kushinagar and Buddhist sites in and around Kathmandu, just in seven days.

You will fly in Varanasi, the spiritual capital of India and drive through the sites important in Buddha’s life to Lumbini in Nepal. Sarnath is where Buddha gave his first discourse after enlightenment, Bodhgaya is where he got enlightened and Kushinagar is where he attained Parinirvana. Spend one night at each place and explore the magnificent monastic and temple ruins. Cross the border where you will get Nepal visa on arrival and then drive to Lumbini, the birth place of Buddha. From Lumbini, fly to Kathmandu and explore the Himalayan citadel in juxtaposition of trans-Himalayan trade. Kathmandu nourished Buddhism during its crisis in south and later played important role in disseminating it to Tibet and further. Visit the Guru Rinpoche cave at Pharping and the oldest existing Buddhist town of Patan. Visit Boudhanath Stupa and Swyambhunath stupa.
Tour inquiry >
Complete Buddhist Circuit Tour
of India - Nepal - 12 Days
Buddhist pilgrimage
of Nepal - 9 Days
Go on one week Buddhist tour of Nepal and India this January and February. Winter is the best time to embark on this spiritual journey of lifetime.
Price : USD 780 includes
Duration : One Week / 7 Days
Season : November - March
Accommodation : Standard | Deluxe
Starting city : Varanasi, India
Ending city : Kathmandu, Nepal
Transport : Private car | Flight
Note : Your can get online visa for India and Nepal visa is easy to get on arrival at border. Just need to bring passport size pictures.

Buddhist tour of India and Nepal One week

Our represent will pick you up from Varanasi airport and take you to the hotel. Later visit the archaeological site of Sarnath. This is where Buddha gave his first sermon. The site have restored 3rd century engraved Ashokan pillar, Dhamek Stupa established to commemorate the ‘dharmachakra pravartana’ at the deer park, the Mulagandhakuti vihara, where Buddha spent the first rainy season. Also visit the Sarnath museum and the Chaukhandi stupa marking the place where Buddha met his first five disciples.

In the morning, we will drive to Ganga River and take a boat tour along the temples and cremations grounds. There are about 100 Ghats and sunrise boat trip is the best way to see the cultural activities and ceremonies at each Ghats along with ‘Manikarnika Ghat’ which has dead body burning around the clock. Later drive 244 km / 6 hrs to Bodhgaya. Bodhgaya is where Buddha attended enlightenment. The 55 m / 180 ft Mahabodhi temple, first built by Emperor Ashoka in 3rd century, stands intact after heavy restoration. The site is designated by UNESCO as World heritage site. The descendant of original Bodhi tree still provide shed over the ‘Vajraashana’ (seat established by Emperor Ashoka at the site where Buddha attained enlightenment).

Spend a beautiful morning visiting Mahabodhi temple and then drive to Kushinagar. This is where Buddha gave his last teachings and attained Parinirvana. The third century parinirvana stupa and the nirvana temple with 6.10 m long reclining Buddha still exists at Kushinagar. Also visit the Rambhar Stupa marking the site where Buddha was cremated.

On the day we will drive towards Nepal and cross to Lumbini from Sunauli border. Getting Nepal visa is easy as it is available on arrival and costs USD 30. From the border Lumbini, the birthplace of Buddha is only about 25 km. In the afternoon, visit the 3 by 1 miles area of Lumibni which consists of monastic zone with monasteries from around the world, world peace pagoda and the sacred garden with Mayadevi temple. The sacred garden has Ashokan pillar with inscription about Buddha’s birth place, Puskarini pond (Buddha and his mother took bath) and Mayadevi temple housing the marker stone pinpointing the exact birthplace of Buddha.

Even though it is only 300 km, driving may take about 10 hrs in the mountainous road of Nepal. Flying we will save time. From Kathmandu airport, drive to Boudhanath stupa. The colossal stupa with over 60 monasteries give the ambiance of ‘little Tibet of Kathmandu’. Later drive to Swyambhunath stupa on a hillock overlooking at Kathmandu valley. Swyambhunath is one of the oldest existing monuments in Kathmandu valley dating back to 5th century or earlier.

Day 06: On the visit Pharping cave and Patan

On the day, we will visit Yanglesho, the cave of Guru Rinpoche (Padmasambhava). The cave in the southern rim of Kathmandu valley is believed as a place where Guru Rinpoche got enlightened and is as important as Bodhgaya for Tibetan Buddhists. Yanglesho was visited by many other Tibetan Buddhist masters like Marpa Lotsawa. Later visit the oldest existing Buddhist city of Patan. Reminiscence of Patan as monastic town still exists with its over hundred monasteries in old town. Oldest ones date back to 7th century. Visit the golden temple, Rudrabarna Mahabihara and the iconographic museum at the palace.

Day 07: Drive to the airport for final departure

Customize Buddhsit tour of Nepal from 5 - 10 days.
Visit Lumbini, the birthplace of Buddha, meditation cave of Guru Rinpoche (Padmasambhava) and other must to visit Buddhist sites of Nepal. Feel the vibration of the land where Buddhism is way of life and understand the development of Buddhism while visiting the living Buddhist heritage of Nepal.
Buddhist tour of Nepal

It was our pleasure to organize Buddhist tour for famous stage director Mr Vasily Barkhatov and light artist Mr Alexander Sivaev on the pretext of Opera ‘Awakening’ composed by renowned British composer ‘Param Vir’. The full-scale opera, ‘Awakening’ is based on early Buddhist canon and explores the liberty and peace preached by Buddha. The Opera is scheduled to be performed Bonn Opera House for Beethoven 250th Anniversary season 2020.

Buddhist tour with us:

A Journey to land of Buddha 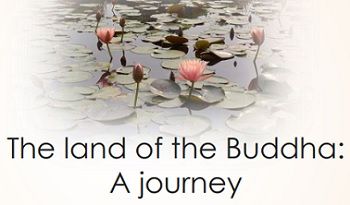 This was one of a lifetime tour! I took the Buddhist Pilgrimage Tour and I will never forget about it. Rabi is super professional and flexible to adapt to each person needs and wishes. He has a deep knowledge of the places and I really enjoyed our philophical discussions of Buddhism, Hinduism, life, destiny and Karma! He was always very helpful and super kind with me.

Visit Lumbini, the birthplace of Buddha as a day trip from Kathmandu or take your time to immerse into Buddha's life by visiting Tilaurakot palace, Ramgram Stupa and other important archaeological sites around Lumbini.

Combine your Buddhist tour with visit of Taktsang monastery (Tiger's nest) in Bhutan. Experience the warm hospitality, culture and unsurpassed nature of a Buddhist land and hike to Guru Rinpoche's Taktsang cave where he is believed to have meditated three years, three months, three weeks, three days and three hours in the 8th century.

Witness the mystic Tantric Buddhist festival of Tiji in Mustang, the last vestiges of medieval Tibet.Details >

Visit Pokahra 'the natural capital' of Nepal with its astounding setting of beautiful lakes with lush hills offering panoramic view of the Himalaya including three 8,000 m snow peaks. More >

Extend your Buddhist pilgrimage tour and visit the mystic land of Lhasa in just 3 nights 4 days.

One hour flight to Mt. Everest leaves every morning from Kathmandu. This is the best way of capturing 5 out of top 10 highest mountains in the World including Mt. Everest.

The verdant hills around Kathmandu provide good hiking. Shivapuri National Park, Nagarkot and Dhulikhel are famous hiking in the outskirt of Kathmandu.

DALAI LAMA wishes to abandon the reincarnation. China says, he has no right to do so. Tibetans fear China will use his succession to split Tibetan Buddhism.
Shamarpa's cremation in Nepal Cremation of the 14th Shamarpa took place at Shar Minub monastery in Ishangunarayan in supervision of Holiness the 17th Karmapa Trinlay Thaye Dorje.
More on Himalayan News >