One of the quick and best ways to experience Himalayan peaks is by flying closer to them. There are several fixed-wing flights, helicopter charter flights, Ultralight aircraft and paragliding in Nepal.
The most famous and cost effective flight for Himalayan sightseeing is the fixed-wing flight to Mt Everest from Kathmandu. This is well known as mountain flight or the Everest sightseeing Flight.

I was connected to Rabi and have absolutely no regrets. I told him of wanting to see the Himalayas up close and he told me about the helicopter tour where you get to actually land at Annapurna Base Camp. Without skipping a beat, he booked everything for me including a car to pick me up. All I had to do was actually show up. And wow what an experience! To see the Himalayas up close to you was amazing. 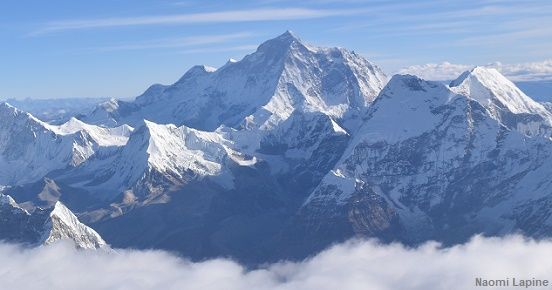 The one hour fixed wing flight from Kathmandu is the best way to see Mt Everest. The flight leaves early in the morning from Kathmandu and hovers close to the Himalayas east of Kathmandu. Passengers can see as many as 20 Himalayan peaks east of Kathmandu. As the flight lifts in the sky, peaks of Langtang, Doreje Lakpa and Sisa Pangma come into sight. Then the flight further passes next to Gauri Shankar, Cho You to Mt Everest. Makalu and Kanchanjunga appear at a distance. 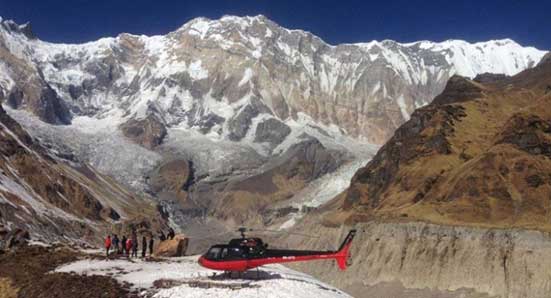 Helicopters are the most effective way of sightseeing Himalayan Mountains. Helicopters fly closer and also land at the mountain bases allowing passengers more time to take pictures and enjoy the Himalayan scenery. The most popular helicopter mountain flights are to Everest base camp and Annapurna base camp.

Helicopter tour of Everest base camp is a day trip from Kathmandu suitable for those limited with time to go on two weeks Everest base camp trek. The 3 hrs flight is the most guaranteed way of exploring the Sherpa land, up close aerial view of Mt Everest, Khumbu icefall and other Himalayan peaks east of Kathmandu. The flight takes off from Kathmandu and lands at Lukla airport. From there, follow the Dudh Koshi valley up to the Khumbu glacier. The flight circles the base camp for the 360 degree view of snow peaks and Mt Everest and lands at Kalaphatter. Fly back to Everest view hotel and enjoy the scrumptious breakfast with the breathtaking view of Everest and other snow peaks before flying back to Kathmandu.

Ultralight aircraft flight is mankind's closest achievement 'to flying on wings'. Ultralight flying is available in the lake city of Pokhara, Nepal in the arena of World's highest mountains. This is the bestever flight with the backdrop of World's highest mountains (Annapurna, Dhaulagiri, Manaslu). Safetywise, ultralight is the safest with its extraordinary aerodynamic design, It can fly for hours even with the engine shut off. Ultralight can take off and land on a field and dirt road.

Mountain Flight with us:

6 day Nepal tour is the best cultural and Himalayan sightseeing tour of Nepal. Visit the cutlural and heritage sites of Kathmandu. Go on a Everest sightseeing flight while in Kathmandu. Engross with natural beauty of Pokahra with the Himalayas and lake.

Everest national park has now many comfortable lodges. Based on these lodges, one can do a short trek to Sherpa villages of Namche, Khumjung and Tengboche.

Fly to the dragon kingdom of Bhutan form Kathmandu. Experience the warm hospitality, culture and unsurpassed nature amid homely comfort.

Fly from Kathmandu to Lhasa of Tibet. Visit the religious and cultural centers of the most dreamt city and fly back. All in as less as 3 nights & 4 days.

Zip-Flyer. Accelerate down 2,000 ft with speed of 140 KMH. Make your free flying dream comes true by

paragliding or get close to mysterious Himalayan peaks with Ultralight flights. All in perfect natural setting of Himalayan peak and turquoise lake.