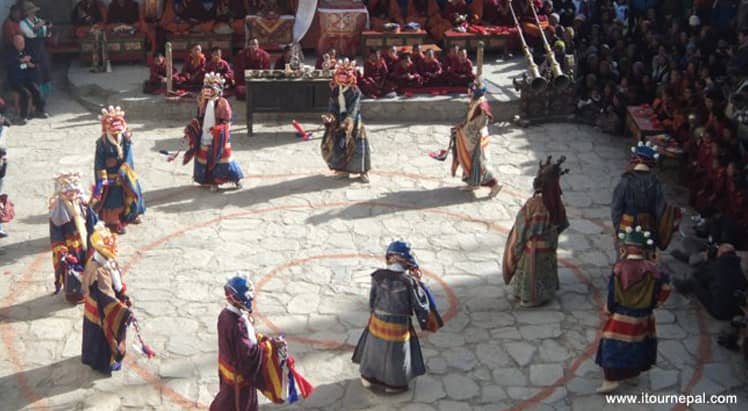 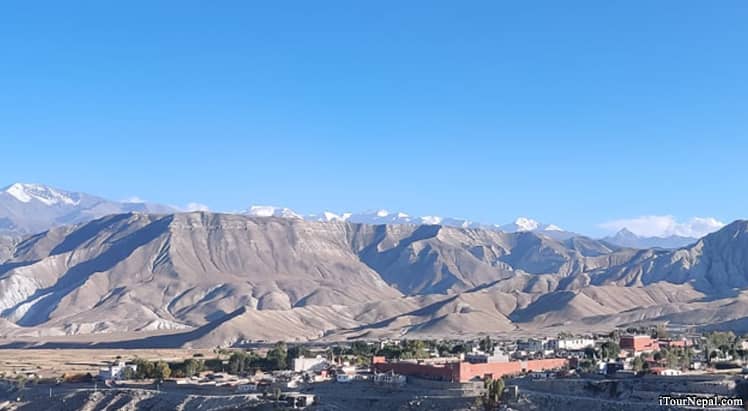 Travel to the last vestiges of the Himalayan Shangrila while it celebrates the most mythical mask dancing festival of tiji.

Hidden between the world's highest mountains, the kingdom of Mustang ( Lo ) is an enclave of medieval Tibet. Located in the southern edge of the Tibetan speaking world and at the trans-Himalayan trading corridore, Mustang was one of the culturally and religiously rich kingdoms of medieval Tibet.


Tiji festival is the last of such festivals celebrated in the land of its origin. The monks perform the sacred dance of Vajrakila as a form of meditation with meaningful intricate movement, gesture and expressions. This is a three day long mystic mask dancing festival commemorating the betrayal of evil by Dorjee Sonnu, an incarnation of Buddha. The monk who embodies "Dorjee Sonnu" had to meditate with strict Tantric rituals for three months.
Tiji is an abbreviation of the word "Tempa Chirim" which means "Prayers for world peace". Mustang has been celebrating Tiji since it was first performed by Shakye Trizin (holder of Shakye thorn) while he was in Chode monastery in the 17th century. They also perform puja (combination of reading scriptures, making offerings and playing instruments) at Chode monastery and unfurl huge 500 years old Thankas during the festival.

The date of Tiji festival differs each year in the Gregorian calendar as the Tibetan calendar relies on the lunisolar system. Tiji festival 2023 falls on 16 - 18 of May. Our driving tour starts from Kathmandu on 10 May and ends on 22 May in Kathmandu.

It is still not late. Fly to Jomsom airport and then drive to Lo Manthang to join the Tiji festival. It is now only about 6 hrs drive away from jomsom, the district capital of Mustang. It is better to drive to Muktinath first and spend a night in Kagbeni for better acclimatization. Customize a last hour Tiji festival tour.

10 May: Arrive Kathmandu, pick up and transfer to Hotel.

Our represent will be at the airport as per your flights details given earlier. Drive to the hotel and rest. In the evening, briefing about the trip.

This is a day we will prepare for the driving tour to trans-Himalayan region of Upper Mustang. While our representative get the final restricted area permit, a Kathmandu sightseeing will be arranged. A sightseeing of the UNESCO Heritage of Kathmandu with an expert guide will unveil the Himalayan culture and spiritual philosophies.

We drive west of Kathmandu to Pokhara through the lush mountain valleys. The road winds along scenic valley basin dominated by farming terraces and charming villages connected by suspension bridges. Closer to Pokhara, we will see snow peaks of Annapurna and Manaslu range in the backdrop.

Enjoy the scrumptious breakfast with in vicinity of Phewa lake and the Himalayas. After breakfast, we set out on our journey to Mustang. We first drive west to the town of Beni and then head upstream Kali Gandaki river. The Kali Gandaki valley at this point becomes the world’s deepest gorge, wedged between Dhaulagiri (8,167 m) and Annapurna I (8,091 m). The narrow gorge widens up with arid mountains and snow peaks as we enter Mustang. Marpha is one of the prominent Thakali village in the lower Mustang.

By now we are literally in the trans-Himalayan region and the secrets of forbidden kingdoms unfold one after another. At Kagbeni, we register our permits and officially enter the restricted area of Upper Mustang. These were the dwellings of ‘Khampa warriors’ who were fighting against the Chinese in 1960es. Elders from the village still recall their memories. On the way, you can visit Chungsi cave believed to be meditated by Guru Rinpoche (Padmashambhava). Tsarang is one of the historically and culturally important villages in Upper Mustang. The village has some ancient stupa, a palace and a monastery with murals. It is believed that the monastery used to host ceremonies with up to 10,000 monks in its hay days. The day's drive is short but an easy hike to Titi Lake and Dhumba Lake gives you more insight of the culture and lifestyle of lower Mustang. The exploration is also the best way to gaze at the picturesque Dhaulagiri, Annapurna and Nilgiri. There are lots more to explore like the Bon village of Lubra and you can even drive to Muktinath for an overview of the Kali Gandaki valley and the Himalayan ranges of Dhaulagiri and Annapurna.

15 May: Hike to Ghar Gompa and drive to Lo Manthang, the walled city.

Short hike to Ghar Gompa, allows you to explore and see the farm, pastures and the monastic life off the main village of Mustang. Ghar Gompa is believed to the first Tibetan Buddhist monastery established by Guru Rinpoche even before the ‘Samye monastery’ in Tibet. Its rustic ancient appearance with mystic painting and sculptures is rarely seen elsewhere. Later drive to Lo Manthang and check in local lodge. Later walk around the Michelle Paisel’s ‘Lost Tibetan Kingdom’. The place has less changed since then.

The largest festival of the kingdom of Lo is celebrated with great zeal and devotion. This is the time when Lobos of Mustang exhibits best of their culture. The celebration starts with Puja ceremony in the Choedhe monastery inside the walled city. The monks perform several dances for three days commemorating the victory of Lord Buddha's incarnation "Dorjee Sonnu" over a demon called Man Tam Ru a vicious creature feeding on human beings and causing storms and droughts. The dances displays : You can also visit the higher reaches of the Lo Manthang on these days covering the major dances.
Visit Namgyal gompa, sky caves of Chhoser and the Garphu gompa. Honeycomb caves of Mustang dating back to over 3,000 years have been subject of excavation for archaeologists from around the world. These caves have been used for burial, meditation and also for living. Some of them are still being used in Chhoser and nearby villages.

19 May: Drive back down to larjung village.

Explore the Ghhursanbo cave and the water in the higher reaches of the village and enjoy the view of snow peak.

20 May: Drive back to Pokhara.

21 June: Drive back to Kathmandu.

22 June: Drive to the airport for final departure.

Can I join the Mustang Tour from Pokhara ?

Accommodation in Mustang is a basic lodge run by local families for few nights. There are a couple of decent hotels with attached bathrooms in Lo Manthang and Jomsom. Western commode toilets and 24 hrs hot showers are available throughout the trip even in the lodge with a common bathroom.

May is the perfect time for a Mustang tour as spring in the trans-Himalayan region comes late. While the monsoon clouds start to gather in the southern slopes, the mighty Himalayas create rain shadow in Mustang. Maximum Temperature ranges from 7 - 12°C and the minimum will be between -1 to -7°C. Humidity will be 99 % and the wind speed of 9.9 mph

You need some extra cash for meals in Kathmandu and Pokhara and also for bottled drinks, tips and extras during the Upper Mustang trip. It costs about USD 20 - 25 total per day for lunch and dinner in cities. Drinks are additional. During the driving tour, bottled water and beverages will make about USD 15 / day. In general you need to budget about USD 400 as extra expenses while in Nepal for the trip.

Even though it is one of the adventurous driving tours crossing the Himalayas, our well trained and experienced crew know how to make the trip safe and enjoyable. Choice of right vehicle, responsible driver and the flexible itinerary with ample time to explore off the vehicle make our Upper Mustang driving tour the best.

How is Upper Mustang driving tour ?

Upper mustang tour allows travelers to cover a wide distance in hours which would otherwise take days of trekking and without missing the beautiful landscape, Himalayan scenery and the cultural experience. Experience the dramatic change in landscape from lush Himalayan foothills to windswept valleys in yellow, orange and brown. Traverse the Himalayas through the gorge wedged between two 8,000 m peaks of Annapurna I and Dhaulagiri and discover the lost Tibetan kingdom of Mustang. However the road is mostly unpaved although most sections are graveled and maintained. The road is winding and vertiginous at points. Driving a tour of Upper Mustang is adventurous yet rewarding.

The extensive road expansion will soon
change its essence. So this is last
chance to see the Mustang. - Lonely Planet
Mustang Tour with us:

Great experience with itournepal, from early stages to completion. We went for a 2 weeks motorbike tour in Mustang, starting from Kathmandu. Rabi managed successfully all the organization of the trip including immigration papers (Covid19-required), itinerary, accommodation, motorbikes, backup car, mechanics, guide, etc. The "tentative" itinerary turned out to fit our expectations splendidly, and almost no changes were made during the journey.
A special mention to Dil, best guide I have been with. And key to this very successful trip.

Enjoy the untouched culture and heritage of two Himalayan countries, this May. May is end of Spring touring season for the Himalayas. But the varying altitude makes May the best time to do this tour of Nepal and Bhutan.