The easy access from Kathmandu, the awe-inspiring Himalayan landscape and the intact Tibetan Buddhist culture make Langtang trek popular among the trekkers. A short trek from Kathmandu to Kyanjin gompa takes 8 days. Langtang trek also offers an opportunity of climbing 5,000 m Cherko Ri and 5,732 m Yala peak.
Langtang region in the north of Kathmandu has been a popular trans-Himalayan trade route from ancient and medieval period. The Langtang valley also was a safe haven for Buddhism during the crisis. Hence Langtang exhibits the most vivid culture of Shamanistic Tamangs and Tibetan Buddhist Sherpas. It is protected as Langtang National Park and has a number of high peaks including the highest Langtang Lirung (7246m).

Day 01 : Kathmanud arrival | Pick up from the airport and transfer to the Hotel | Discuss trek / tour and have a easy evening.

DAY 02: DRIVE TO SYABRUBENSI (7Hrs / 117Km) | Overnight in lodge
We will start our scenic drive north of Kathmandu in the winding mountain road. As we come around the mountainside, Ganesh Himal looms at a distance. At Dhunche we enter into Langtang National Park, from where the road climbs down to Syabrubensi.

The trail follows upstream Langtang river through trees with Langur monkeys frolicking around. The walk is pleasant with scenic stops by waterfall and river view. There are some steep short climbings at some points.

DAY 04: TREK TO LANGTANG
The trail continous to follw the Langtang river, climbing steeply through a forest of hemlocks, mapples and rhododendrons to popular luchtime spot of Ghora Tabela. There are fine view of Langtang Lirung. From Ghora Tabela, the valley opens wide and tail climbs gradually to Langtang village.

DAY 06: Hike to Cherko Ri (Tserko Ri) 4,985 m
Cherko Ri with almost the 5,000 m altitude, offers magnificent view of Langtang valley and snow peaks in all 360 degree. The view well worth the walking (ascend and decend) for about 5 - 6 hrs on the beaten path, rocky terrain and pasture. You can also spend a day relaxing or exploring the Langtang valley.

Day 07: Trek down to Ghora Tabela or Lama Hotel after enjoying a morning in Kyanjin gompa.

DAY 08: TREK BACK TO Syabrubensi

DAY 09: DRIVE BACK TO KATHMANDU | OVERNIGHT IN HOTEL

DAY 10: DRIVE TO THE AIRPORT FOR FIANL DEPARTURE 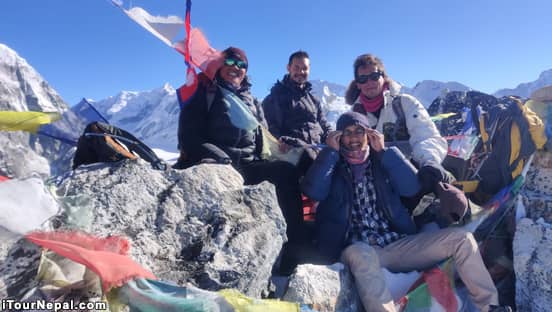 US 200 for a Yala peak climbing package with guide, tent and all meals. Just in one additional day in the above itinerary, you can climb one of the most spectacular peaks in Nepal. Yala peak is for fit trekkers looking for more adventure. The peak doesn’t need mountaineering training or prior experience. However, it allows you to try your mountaineering skills and gears.

Combining Langtang valley trek with Gosaikunda Lake allows you to walk back the different way, reduce the driving distance and have an overview of the Langtang and Ganesh Himal ranges. Within 10 days of trekking you can visit Kyanjin Gompa and climb to the holy lake of Gosaikunda.

Kathmandu valley in the foothills of Langtang Himal shares its northern border with Shivapuri national park. With Langtang national park just 18 km away, Kathmandu is base for several treks in the Himalayas. Short treks from Kathmandu could be planned from 2 days to one week.

6 days | September - December
Grade : Difficult
Gosaikunda Lake is another short trek from Kathmandu. The trek starts from Shivapuri national park in the north of Kathmandu and goes to Gosainkunda Lake at 4,380 m in Langtang National Park.

3 days | September - June
Difficulty : Moderate
The Shivapuri national park in the outskirt of Kathmandu offers short and scenic trek around Kathmandu. The trek climbs up to 2,200 m and follows the ridge overlooking at Langtang and Jugal Himal..
Langtang Trek with us:
- Read about us

Featured in the list of 52 places to visit in 2017 by New York Times, trekking in Langtang aids to its recovery from the 2015 Nepal earthquake.

I did a trek to the Langtang region around mid-february 2016. Our intended route was: Lama Hotel – Langtan – Kyanjin Gompa, then return down. We realized that we were one of the first people to resume trekking in this region following the April 2015 earthquake. 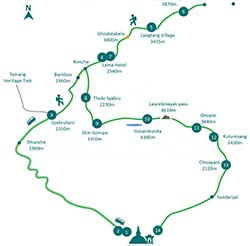 Langtang Heli-trek is the best way of experiencing Himalayan trek for those sort of time. The helicopter flies into alpine meadow surrounded by snow peaks leacing us with easy and scenic peace of trek.Details >

Upper Mustang is politically in Nepal but culturally and geographically in Tibet. Visit this last Tibetan Kingdom outside of Tibet, before it changes. More >