Upper Mustang trek starts with an 18 minutes spectacular flight to Jomsom, the district capital of Mustang. The flight navigates through the valley wedged between Dhaulagiri (8,167 m) and Annapurna (8,091m) to Jomsom at 2,800 m. The journey further follows upstream Kaligandaki past honeycomb cave settlements and Tibetan Buddhist villages with mystic monasteries and ruins of fortresses. The eroding, arid landscape has deep canyons making the trekking route twisty and full of steep ups and downs.
Mustang is an almost rectangular landmass protruding into Tibet in the trans-Himalayas of Nepal. Geographically and culturally Mustang is Tibet but politically it is in Nepal.

The Himalayan citadel and the Buddhist belief of nonviolence spared Mustang of strife in Tibet and Nepal. Hence Mustang is one of few places in the Himalayas where the living history of the medieval Himalayan civilization still prevails.
In 1955 a Frenchman, Michael Pascal became the first European to trek to the kingdom of Mustang. He discovered Mustang as a medieval world where the wheels are not used, the earth was believed flat and polyandry practiced.

Mustang in the rain shadow of the Himalayas is the best place to trek in the months of September. Days are warm with moderate temperatures ranging between 22 to -9 °C. While September is much warmer with last clouds from monsoon, October has cooler temperature with crisp sky. Mid September is the best time to visit Musting to enjoy the best Autumn weather and avoid the peak season crowd.

This medieval Tibet outside of Tibet rejoices in the mystic mask dancing festival of Tiji, contemplating a demon chasing. Tiji has a root in the Tibetan language meaning ‘prayers for world peace’. Dances of ‘Tsachham’ and ‘Ngachham’ are performed by monks of Lomanthani Chhyode Gumpa on the first and second day. Two huge 500 years old Thangkas are displayed during the festival. Main monk who embodies Dorje Sonam, the killer of demons, performs dances on the third and last day. The monk has to go on 3 months' retreat with fasting to represent the main deity of Tiji. Join a trek to Mustang for Tiji festival May 2023.

Take an early morning flight to Jomsom (2,705m/8,900ft), the administrative centre for the Mustang district of Nepal. En-route we fly between Annapurna I (8,055m/26,500ft) and Dhaulagiri (8,146m/26,800ft). We will meet our porters in Jomsom and trek 8km (4hrs) to Kagbeni, which is situated at the confluence of the Jhong Khola (river) and the Kali Gandaki River.

The trek to Chele is 18km (7 hrs) from Kagbeni, where we head north along the Kali Gandaki River. The trail goes up and down for two hrs to avoid the many river crossings, and then climbs steeply to a plateau avoiding a vertical-walled bluff ahead. From here it is a gradual climb to Tangbe (4 hrs). The trail climbs to 3,100m/10,199ft and then drops steeply to the banks of the Kali Gandaki. We will walk along the river bed crossing to the western bank before making a small climb to Chele.

The trail climbs to Taklam La Pass (3,624m/11,923 ft) through plateaus and narrow stretches with views of Tilicho Peak, Yakawa Kang, Nilgiri and Damodar Danda. It then descends a little to the village of Samar, altogether three hrs from Chele. Between Samar and Geling the trail remains over 3,700m/12,173ft, so the group should be well acclimatized to camp in between. The first campsite arrives after two hrs of climbing (mostly gradual), but only provides camping for a few tents. Another campground with nicer prospects is just one hour further.

The trail gently climbs to the Yamda La (3,850m /12,667ft) passing teahouses, chortens and Tibetan-influenced villages, and crosses over a few other passes. The longer climb will be to Nyi Pass (4,010m/13,193ft) after lunch, the trail then steeply descends to Ghame.

This is an easy trekking day of 11km (4 hrs) to Tsarang. After crossing Ghame Khola below Ghame, the trail climbs to a plateau and passes beside a very long mani wall. From the end of the wall the trail heads east to Tsarang, gradually climbing and then descending.

The 13km (5 hrs) trek to Lomangthang hosts magnificent views of Nilgiri, Tilicho, Annapurna I and Bhrikuti peak. The trail first descends to Tsarang Chu Canyon and then climbs steeply after crossing the river. Further the trail ascends gently to the 3,850m windy pass of Lo, from where you can see the Lomanthang Valley. While descending to Lomangthang, views of the walled city appear magnificent with its hills on the Tibetan Border.

Explore the eastern valleys and the Nyphu and Gharphu Monasteries before returning to Lomangthang. This trip is 12km (5-6 hrs) round trip.

This will be another roundtrip day excursion to explore Namgyal, Tingkar and the valleys to the west (7km/4-5 hrs).

Day 14: Fly back to Pokhara | Overnight in Pokhara

Even though most of the villages in Upper Mustang are now connected by dirt road, there are very few vehicles. It is still worth trekking in the Upper Mustang. Walking trails mostly avoid dirt roads and allow you to explore the caves, temples and local monasteries you would miss otherwise. Also our itinerary makes a loop following the more remote trails on the eastern bank of Kali Gandaki valley.

It is possible to customize Mustang Trek with one way drive and trek the other way via Luri Gonpa, Tetang an Tangbe to Muktinath and back. This will make the itinerary of 12 days. Write us to combine Upper Mustang trek with Nar Phu valley or round Annapurna trek also.

Mustang tour by jeep with hikings 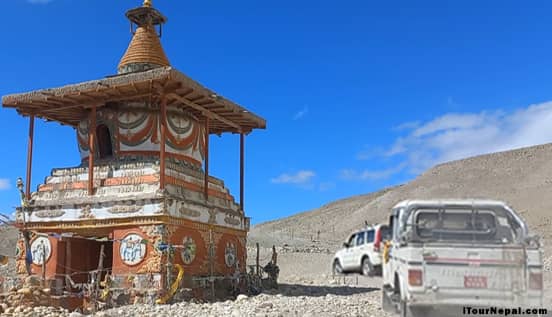 Mustang trek with us:

Great experience with itournepal, from early stages to completion. We went for a 2 weeks motorbike tour in Mustang, starting from Kathmandu. Rabi managed successfully all the organization of the trip including immigration papers (Covid19-required), itinerary, accommodation, motorbikes, backup car, mechanics, guide, etc. The "tentative" itinerary turned out to fit our expectations splendidly, and almost no changes were made during the journey.

Lonely planet has listed Mustang trek in third position under its list of 'Best in Travel 2013'. The extensive road expansion will soon change its essence. So this is last chance to see Mustang.

Jomsom - Muktinath Trek
Lower Mustang region of Jomsom – Muktinath is the reminiscence of the Mustang kingdom. The region is vivid with snow-Peaks, b Buddhist and Bon practices and landscape.

6 things to observe in Upper Mustang.

6 days Bhutan tour
Join Bhutan tour for one of the biggest festival held in its capital, Thimphu. Enjoy the rare mask dances commemorating the events in life of Guru Rinpoche.

One hour flight to Mt. Everest leaves every morning from Kathmandu. This is the best way of capturing 5 out of top 10 highest mountains in the World including Mt. Everest.

The foothills of Himalaya provide beautiful short and easy treks and day’s hike starting from either Pokhara or kathmandu.