We offer the best family holiday for family with kids.

Nepal tour with soft adventure of rafting and trekking.

See Mt Everest and 3 other UNESCO Heritage sites of Nepal.

Combine your Nepal tour with short treks in the Nepalese Himalayas

Nepal Touring places and things to do in in 2021

Nepal tour is a blend of activities for Himalayan scenery and cultural experience. There are several Himalayan view points, historical places and wildlife safari destinations that one can fly or drive to. Hiking and rafting add the flavor of adventure to Nepal tour.
With extension of road and airstrip, it is possible to visit pristine valleys of the Nepalese Himalayas without multi-days strenuous trekking. Here we have listed the most popular places to visit and things to do in Nepal in 2021.

Nepal is open and is the safest destination to travel now. Mountains are free from Covid 19 and Nepal trips are about going off the crowd to the serenity of nature.

Culturally and naturally, Kathmandu valley resembles the whole of Nepal. For centuries, it has been tolerant to different cultures, religions and ethnicity. In the backstreets of bustling town exists the medieval Kathmandu, bedecked in its marvelous wood carvings and terracotta. Kathmandu is dotted with historical Pagodas, pavilions, stone water spouts, stupas and monasteries. Seven groups of them make Kathmandu a UNESCO Heritage site. The Shivapuri national park and protected community forests in the valley rim offers splendid day hikes and short treks with Himalayan views. Find touring places in and around Kathmandu.

Pokhara is renowned as the 'natural capital' of Nepal for its astounding setting of beautiful lakes and lush hills with close view of Himalayas in the northern skyline. With the backdrop of three 8,000 m snow peaks, Pokhara provides the ground for various adventure activities such as trekking, mountaineering, White water rafting and paragliding and more. Pokhara Tour - Places and activities >

Large portion of Nepal is being protected as National Parks and Wildlife Reserves. Nepal's national parks protects diverse wildlife and exotic bird species. Chitwan and Bardia are last vestiges of Terai which once spread north of Indo-Gangetic planes till the foothills of the Himalayas. Acknowledging the importance of conservation of the region, Chitwan National Park is declared by UNESCO as World Heritage Site. A full board package based in safari lodges give you chance to explore the jungle on elephant back, jeep safari, guided jungle walk, canoe ride and more.
Chitwan National park
Bardia National park
Koshi Tappu

Sunrise and sunset over Himalayas from hill stations of Nepal 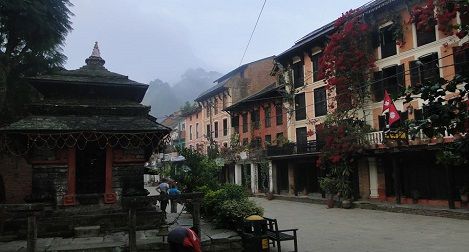 Bandipur is a hill town overlooking at the Himalayas with the reminiscence of centuries old trans-Himalayan trade. The town is getting more attention of tourists for its easy access and unparallel beauty. One can still see most of the houses with carved windows and slate roofs and the ground floor that opens towards streets for business. With its exquisite panorama of Annapurna and Manaslu ranges, it is often considered as natural view tower.
Bandipur at 1,030 m is just 8 km from the Kathmandu – Pokhara highway. It is 143 km from Kathmandu and just 80 km from Pokhara. Stopping at Bandipur will give more insight in Nepal than the tourist centers of Chitwan and Pokhara.
Walk around the cobblestone streets of Bandipur to Khadga devi temple, Tundikhel and climb the hillock marked by Thani Mai temple for sunset view over the Himalayas. If you stay another day in Bandipur, walk to the charming Magar village or Ramkot. 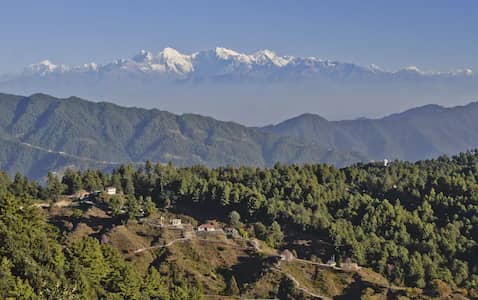 Daman is one of the highest and less visited hill stations in central Nepal. At 2,360 m, Daman offers vista of the longest range of the Himalayas from Dhaulagiri in the west to Mt Everest in the east. It lies 80 km southwest of Kathmandu along the Tribhuvan Highway also known as 'Byroad'.

This is less touristic destination providing best sunrise and sunset view over the Himalayas. Driving through Daman to Chitwan or Lumbini gives glimpse of pristine Nepal. 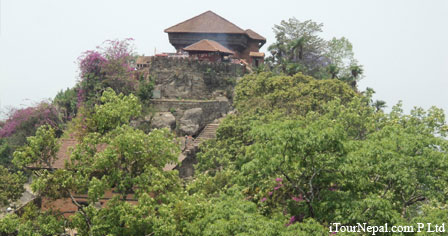 Gorkha, the original home of the Shah kings remains a historical and commercial center. It is 24 km detour off the Kathmandu to Pokhara Highway. Even though Gorkha Bazaar is the base for treks in Manaslu region, village tour and day hike could be planned for culture vultures. A climb to the ridge (300 m) is worthwhile for the panaroma of Manaslu Range and historic Gorkha Palace.

Situated at 1,350m above the sea level, Tansen (Palpa) is another hill station famous for its rich culture and Himalayan view. Tansen lies midway between Pokhara and Lumbini / Sunauli India Border. Tansen is a romantic, medieval hill town full of Newari shop-houses and temples. Being perched high up at Srinagar Hill, Tansen also offers the

scenic melody of planes, hills and the Himalayas. After the downfall of then kingdom in 18th Century, Tansen was reinvented as a Newari trading post on the trade route between India and Tibet. Metalworking and weaving dhaka, the fabric used for traditional Nepali custom are still important local industries.

Beside being the center of reverence for Buddhist, Lumbini also provides an insight on ancient civilization unveiled by modern archaeological excavation. Series of excavations have discovered various edifices from Buddha's time and even earlier. The Modern Lumbini is 3 sq miles of planned area with Sacred Garden, Monastic Zone and Lumbini Village. The tour of Kapilavastu, Kudan and Ramgram extends Lumbini tour from 2 - 5 days. 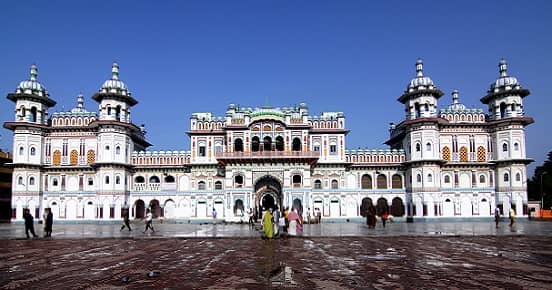 Janakpur is one of the important Hindu pilgrimage sites. It is the capital of Mithila where legendary heroin Sita (Ram’s spouse) from the epic Ramayana was born.
The 16th century Janaki temple and the sacred ponds of Dhanush Sagar and Ganga Sagar are the center of attractions. The Vivah Mandap temple is believed to be a place where Lord Rama and Sita were married.

The once remote town of lower Mustang (Jomsom - Muktinath) is a famous tour destination at present . With access by rugged road and several flights, Jomsom and lower mustang region has become a famous destination for those looking for short easy hiking and cultural tour. Just fly to Jomsom and experience the warm hospitality of 'Thakali' in the trans-Himalayas of Annapurna. Enjoy the view of Nilgiri soaring into the sky. Hike up to Dhumba lake, Kagbeni or horseback ride to Marpha and Tukuche. Muktinath is just 2 hrs drive away from Jomsom.

Just don't see the Himalayas from a distance, but step and feel the most surreal places of the Himalayas with our helicopter tour from Pokhara. Charter helicopter or join group for as less as
USD 220
per person only.

Language
Nepali is the official language of Nepal. However, English is understood and spoken by majority of people in Kathmandu valley and other major cities. 9 day Spiritual tour visiting Lumbini, Pharping, Maratika cave & more | October 2021 - March 2022
Time
5 hours 45 minutes ahead of GMT and 15 minutes ahead of Indian Time.
Vegetation:
Nepal possesses some of the most outstanding biodiversity in the world, ranging from subtropical Rainforests to Alpine deserts.
Weather:
Climate ranges from Tropical in the lowlands to arctic higher altitudes.
Clothing
Warm clothing are required from November till February and tropical wear from March till October.
Religion
Previously Hindu country has been claimed secular. 81.3% Hindu, 9% Buddhist & rest Kirant, Islam , Christian.
Seasons :
Autumn (Sept -Nov). Winter (Dec -Feb), Summer (March - May), Monsoon (Jun- Aug).
Monsoon: June to mid September.
Mostly rains a lot and not suitable time for trekking, however some of the days are often crispy clean. Most of the northern belts of Trans-Himalayan Zones are in the rain shadow which provides rain free trekking.
Water
In major cities boiled and filtered water as well as mineral water is available in most of the hotels and restaurants. Elsewhere, it is advisable to use water sterilization tablets or stick to tea and soft drinks.
Emblems
National Bird :
Impean Pheasant (Danfe)
National Flower :
Rhododendron- Arboreum (Lali Gurans)
Working Hours
Government offices open from 10 to 17:00 hrs in summer and till 16:00 hrs. in winter. On Fridays these offices are open till 15:00 hrs. only.
Official Holiday
Government and most other offices work six days a week. Saturday is the official weekly holiday when most of the shops are closed. Museums remain closed on Tuesdays and other Govt. holidays.
Electricity
220 Volts AC - 50 Cycles through out the country.

Road Transport
Cities like Kathmandu and Pokhara is well connected with India. However entry should be made only from Kakarbhitta, Birjung, Belhiya, Bhairahawa, Nepalgunj, Bhangadi and, Mahendranagar in the Nepal-India border and Kodari in the Nepal-China border. Tourist Buses connect Kathmandu with border town Sunauli, Chitwan and Pokhara. Bus Ticketing >
Domestic Airlines
There are more than 18 domestic airlines operating flights to various destinations. Cheap Flights >
Private Transportation
Vehicle with driver service is available in Kathmandu, Pokhara, Chitwan and other major cities. You can rent comfortable car, van, jeep etc to drive to Pokhara, Chitwan, Lumbini or sightseeing within cities. Rent A Car >

The highest mountain peak in the world (Everest - 8848 m).
The birthplace of Lord Buddha (Lumbini).
The Living Goddess (Kumari) who is worshipped and taken in a chariot procession annually.
The non-rectangular flag.
The best place in the world to study Tibetan Buddhism.
The largest selection of books on the Himalayas and mountain climbing.
Kathmandu the capital city with as many idols as men and as many temples as houses.
Elephant polo match held every year.
A hotel in Everest National park at an altitude of 3870 m, claimed to be the highest hotel in the world (Hotel Everest View).
NEPAL
Is also one of the world’s great trekking paradise and probably the finest country in the world for trekking
Contains one of the ten best rivers in the world for rafting has such a concentration of art, culture and tradition in the Kathmandu valley which cannot be found anywhere else in the world
Is one of the few countries of the world where you can see one horned Rhinos
Contains Kathmandu, which is one of the best places to eat east of Bangkok and west of Istanbul. One guide book has called it ‘budge eating capital of Asia’
Nepal-occupying only 0.1% of the earth is home to :
2% of all the flowering plants in the world.
8% of the world’s population of birds (more than 848 species)
4% of mammals on earth
11 of the world’s 15 families of butterflies (more than 500 species)
600 indigenous plant families 319 species of exotic orchid.