The festival of lights.

Pokhara tour - things to do 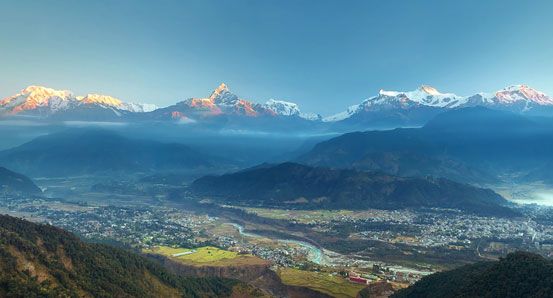 Pokhara is popular for its natural ambiance, 3 lakes and Himalayan scenery. From Pokhara great Himalayan Peaks can be admired without disturbance as close as 30 km. The 8,000 m giants visible are Dhaulagiri (8,167m), Annapurna I (8,090m) and Manaslu (8,163m). Pokhara itself is blessed with sub-tropical climate for lush vegetation and natural settings.

Thangs to do in Pokhara

Phewa Lake is the center of all attraction in Pokhara. It is the largest and most enchanting of three lakes that add to the resplendence of Pokhara. Boating in the Phewa lake also offers insight into bird life of Pokhara and undisturbed view of Himalayas. Lakeside is the most happening tourist center of Pokhara.

This Pagoda is situated on the top of a hill on the southern shore of Fewa lake. It has four images of Buddha facing in four directions. The Pagoda is an impressive sight and its hilltop location commands a grand view. It is a great vantage point, which offers spectacular view of the Annapurna range and Pokhara city.

Sarangkot, a fortress site, overlooking Pokhara Valley is only 20 mints drive away from the lakeside. The hilltop offers a grandstand view of both sunset and sunrise over the Annapurna, Dhaulagiri and Machhapuchre.

Begnas Lake is situated in the eastern part of Pokhara valley, at a distance of 15 km from Pokhara. Tourist can relax in the lodges and resorts situated alongside the lake. Yet another popular lake of Pokhara is the Rupa Lake. It is separated from Begnas Lake by a bridge known as Pachabhaiya. The lakes offer the prefect nature retreat because of their relative’s seclusion and opportunities for boating and fishing.

Since 1959, a group of Tibetan refugees have been living in Nepal. One such is Tashiling Tibetan Refugee Settlement at Chhorepatan, which is located near two popular sightseeing sites i.e. Devi's Fall and Gupteshwar Mahadev Cave. One may visit Tibetan monastery, hand-made carpet factory, schools etc. in this community. Another village is in Hemja, 7 km west from Pokhara.

Locally known as Patale Chango (Hell’s Falls) also know as Devins and Davids is a lovely Waterfall is about 2 km south West of Pokhara airport on the Siddhartha Highway. Legend has it that a trekker by the name of Davy, was washed away by the Padi Khola and mysteriously disappeared down into an underground passage beneath the fall.

Pokhara and its surrounding is mainly the homeland of the world famous Gurkha soldiers. Reminding the reminiscence of those soldiers, Gurkha Memorial Museum has been established in the premises of the British Camp. It contains a collection of used uniforms, Medals, Pictures and more materials used by those brave and courageous soldiers during the first and second wartime.

Pokhara is a base for trekking in Annapurna. The most common trek that starts from pokhara is Annapurna Base Camp. However there are several short treks and day hiking around Pokhara. Most famous day hikes are hikes to Dhampus and World peace Stupa. Other Short treks around Pokhara are :

Join group to share the 1 hr charter flight to Annapurna base camp and back from Pokhara.

The zip flying adventure includes 45 mints drive to the top of Sarangkot hill overlooking at the Pokhara valley and the Himalayas. The butterfly pavilion is exciting place to grab a drink and wait for your turn. From the 5,400 ft, two guests are harnessed to parallel zip lines and whizzed down with the speed of 140 km per hour. This is one of the most exciting zip line in the world with the brilliant view of Fishtail and Annapurna range across the lush valley. Even though you can get the pictures taken, enjoying the view while speeding down the zip line is almost impossible. The 1.85 km zip flight comes to the stop at Hyanja village landing ground with smooth break activated landing. Drive back to the Lakeside town.

Paragliding in Pokhara not only gets you airborne, but allows you to fly like a bird and chances are that you will actually fly with different types of birds including vultures, eagles and kites. Leave your worries behind as you will be flown by some of the best pilots available. They know the airspace very well are trained to make your short flight enjoyable to the fullest. This flight offers you an amazing discovery of the valley even if you are a novice.

Ultra light aircraft flight is mankind's closest achievement 'to flying on wings'. Ultra-light flying is available in the lake city of Pokhara, Nepal in the arena of World's highest mountains. This is the best ever flight with the backdrop of World's highest mountains (Annapurna, Dhaulagiri, Manaslu). Safety wise, ultra light is the safest with is extraordinary aerodynamic design, It can fly for hours even with the engine shut off. Ultra light can take off and land on a field and dirt road.

An exciting River Rafting is also an option if you want bit of adventure in Pokhara. Seti River, just in the outskirt of Pokhara provides fantastic rafting experience of 90 mints.